Everything You Need to Know About Net Neutrality 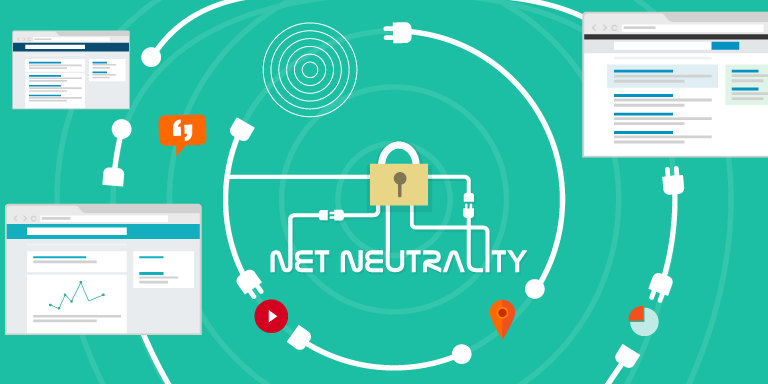 The internet as we’ve known it has always been free and open. It’s that openness that has made it the greatest economic driver of our time, allowing anyone to start a business, connect with consumers, and find success regardless of who or where they are. It’s an entrepreneurial powerhouse that encourages competition and greatly benefits consumers.

The very freedom and openness that have made the internet what it is are under attack. The Federal Communications Commission, the agency responsible for regulating Internet Service Providers like Comcast and Verizon, is trying to abolish Net Neutrality and roll back consumer protections that prevent ISPs from censoring the internet.

What is Net Neutrality?

Net Neutrality is the regulatory principle that internet service providers can’t limit your access to the internet based on the websites you visit or services you utilize. It became law in 2015 when the FCC moved to classify and regulate ISPs as utilities. So, whether I’m listening to Spotify, watching cat videos, or checking my email, my internet provider can’t charge me different rates based on the content I’m accessing.

The core concept of Net Neutrality is that in eyes of ISPs, all data should be equal. It shouldn’t matter if you’re checking Facebook or filing your taxes, your internet provider can’t arbitrarily throttle or block your connection.

Why Does it Matter?

Without strong Net Neutrality rules ISPs will be free to engage in anticompetitive behavior with impunity, creating a system where they, not consumers, decided which online businesses succeed or fail. In a letter to Chairman Pai signed by over 200 companies, including Twitter, Pinterest, Reddit, Airbnb, and Tumblr, the group warns that “businesses may have to pay a toll just to reach customers. This would put small and medium-sized businesses at a disadvantage and prevent innovative new ones from even getting off the ground.”

Ending Net Neutrality will consolidate power in the hands of companies who routinely rank among the lowest in consumer satisfaction and consumer trust. The question is, do you really want Comcast or Verizon censoring what you can and can’t see on the internet?

FCC chairman Ajit Pai has scheduled a vote for December 14th to dismantle the current Net Neutrality rules. If that happens the FCC’s action will be immediately challenged in court, beginning what will likely be a long and uphill battle for the FCC.

“The problem for Mr. Pai is that government agencies are not free to abruptly reverse longstanding rules on which many have relied without a good reason, such as a change in factual circumstances. A mere change in F.C.C. ideology isn’t enough. As the Supreme Court has said, a federal agency must ‘examine the relevant data and articulate a satisfactory explanation for its action.’ Given that net neutrality rules have been a huge success by most measures, the justification for killing them would have to be very strong…But Mr. Pai faces a more serious legal problem. Because he is killing net neutrality outright, not merely weakening it, he will have to explain to a court not just the shift from 2015 but also his reasoning for destroying the basic bans on blocking and throttling, which have been in effect since 2005 and have been relied on extensively by the entire internet ecosystem.”

–Tim Wu, Why the Courts Will Have to Save Net Neutrality

What Can I Do?

Contact your representatives in Congress and urge them save Net Neutrality—there are several online tools to help you do this, including battleforthenet.com, which has lots of other helpful resources as well.